This spring we’ve been busy building four more new high-tunnels to grow tomatoes, peppers, and cucumbers in.  When we’re finished we will have three 17’x96’ and six 17’x144’ high-tunnels on our farm, almost a half acre under cover. 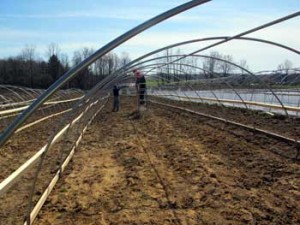 Putting the top purlin on a new high-tunnel

A high-tunnel is an un-heated greenhouse built in the field for the purpose of season extension.  The crops we grow in them are planted directly in the ground, unlike typical “hot-house” style where plants are grown in sterile “soil-less media” and fed a diet of pre formulated chemical fertilizer.   We feel this gives the tomatoes, peppers and cucumbers a more vibrant flavor.