Our team at Main Street Farms is not only committed to providing our community with high quality, organic, and sustainably raised vegetables, but we also strive to create fair wage jobs and do work in our community to educate about healthy eating. All team members on our farm love growing, cooking, and sharing food and we even eat lunch together everyday on the farm! 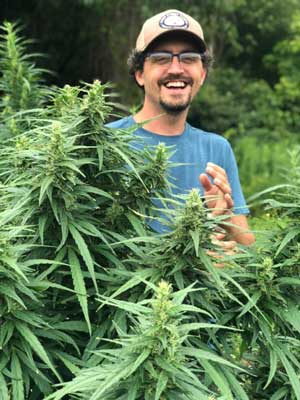 Allan began his career teaching high school social studies, and quickly realized a major obstacle for his students was a lack of fresh and nutritious food. Allan wanted to start a farm to be able to educate kids about where their food comes from and to be able to grow food for the school cafeteria. He started with Main Street farms in 2011 with his friend and business partner Bobcat, partner Adrianne, and generous assistance from friends, family and volunteers. Each year the farm has increased in size and continues to produce more organic food for the Central New York community. Today, Main Street Farms grows over 50 types of vegetables just outside of the City of Cortland. Allan is passionate about organic agriculture, providing healthy food for his CSA members and customers, and creating sustainable jobs for people in the community. Allan is also the President of the New York State Cannabis Growers and Producers Association.

Bob Cat learned about the value of good food and hard work while growing up on Long Island in an Italian family and helping his dad in the garden. Bob Cat studied Communication and Media at SUNY New Paltz, where he met his long-time friend and future partner, Allan. While traveling around the world, Bobcat discovered Wwoofing (World-wide opportunities on organic farms) where he fell in love with farming. Soon after, when his good friend Allan called to tell him he was planning on starting a farm and needed some help, and Bobcat knew this is where he wanted to be. He has held many positions on the farm, including Harvest Manager, Farm Manager, Farm Chef, Pack Shed Manager, and Educator. When Bobcat isn’t working, he can be found playing music with his band, The Local Farmers Union, cooking and eating delicious food, and hiking, traveling, or enjoying an IPA with his wife Kat. 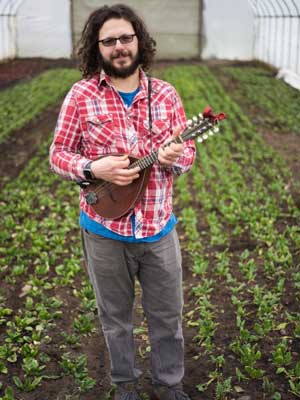 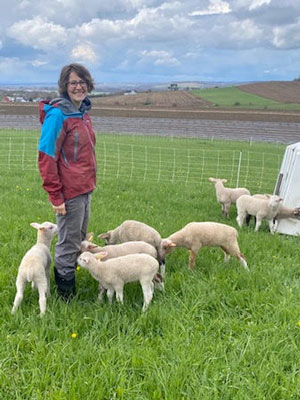 Adrianne (Age) Traub, a Cortland native, started Main Street Farms with Allan and Bob Cat in 2011. On the farm, she fills many roles including manager of the organic certification process, head huntress and agro-ecosystem manager. In 2019, she started Headrow Hill, an Organic U-Pick Blueberry operation adjacent to Main Street Farms fields. Adrianne earned a Master’s of Food Studies from Syracuse University in 2019 and currently works at Seven Valley Health Coalition as a Project Coordinator working to strengthen our local food system and increase healthy food access to low-income community members. In her spare time she enjoys practicing herbalism, tanning leather, backpacking on the Finger Lakes Trail, and contemplating Marxist agrarian theory!

Bret and his wife Stephanie have been farming in the greater Binghamton area for over 10 years. Before relocating to McGraw and starting Shared Roots Farm 5 years ago, they were living and farming in NE PA. They started growing for market in 2008.

Before farming, Bret was a teacher in Nashville. He attended Temple University, where he graduated with a degree in Biology.

After years of farming beside each other, we decided to join forces this year to focus on growing massive amounts of quality veggies together. Bret has a ton of knowledge and experience growing vegetables and running farms. Main Street Farms has lots of land, equipment, and awesome employees. So it was a good fit for both of us.

While Bret will be overseeing all the growing of the vegetables, Steph will still be overseeing Shared Roots Farm CSA and farmers market stand at the Binghamton Farmers Market. They have 2 lovely daughters, Hazel and Sydney.

In addition to farming together, Bret and Bobcat play music together as well. They co-founded the band The Local Farmers Union. 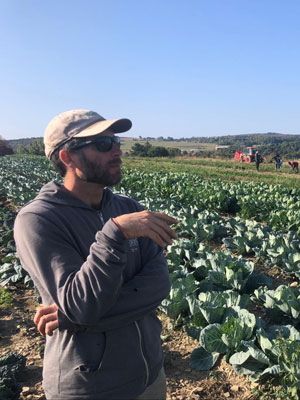 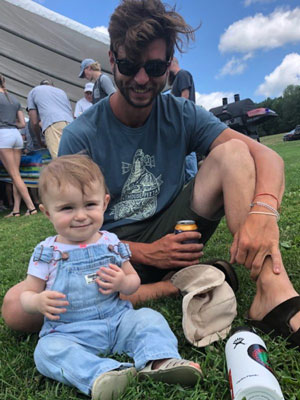 Keegan, a native of Cortland, NY, started working at the farm in 2017 as part of the farm crew and since then has been promoted to harvest manager. As harvest manager Keegan is responsible for all aspects of daily field operations including what to plant and when to harvest. Keegan has two beautiful daughters, Lucille and Lennon, who love spending time on the farm. Follow him on instagram @ inhumanexistence.

Nate Funke hails from the mucklands of Montezuma, NY. He moved to Cortland in 2017 to start working as a part of the field crew. This year he was promoted to field manager and is responsible for managing pests and diseases. On the farm he spends most of his time driving a tractor and identifying and fighting pests and weeds. Nate and his partner Sam just had a baby girl named Josephine! 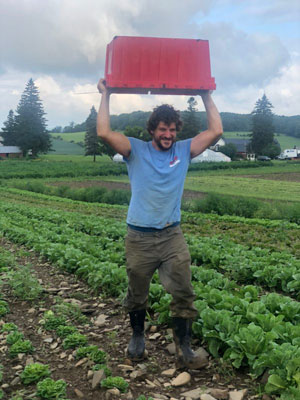 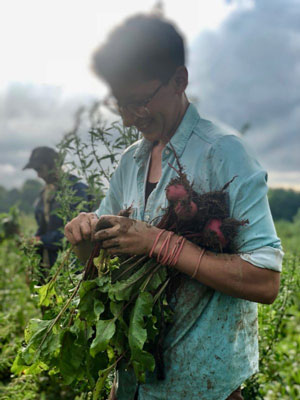 Louisa or “lou” was raised in the swamps of Spencer, NY. They have been part of the farm crew for 3 years now. Their favorite tasks include cultivating medicinal plants, pruning tomatoes, and entertaining the crew with vegetable puns. Lou has also worked in mental health focusing on LGBTQIAA youth communities. Follow her on instagram @Lou-eye-za.

Originally from Binghamton, Paul went to Ithaca College to study Jazz, but graduated with a degree in Philosophy. While he was at IC, his love of Environmental Studies grew. That eventaully let him to a love of farming. Paul has been farming since 2011. In addition to working at Early Morning Farm for a few years, he also helped raise pigs at the Piggery Farm for a few years, before coming to Main Street Farms in 2018. On the farm, Paul loves to think outside the box to come of with unique ways to solve problems. When off the farm, Paul enjoys hiking and camping with his girlfriend Danielle and their dog Catara. 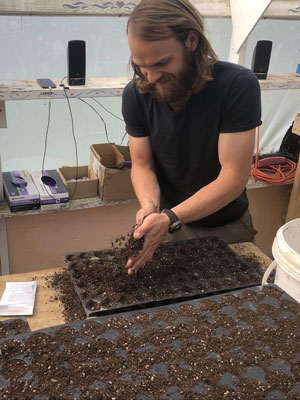 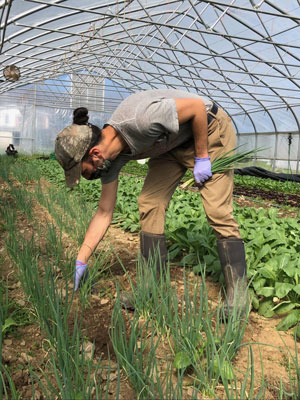 Anthony was born and raised in Western New York. He joined the Main Street team in 2020 from Shared Roots Farm, where he was Assistant Farm Manager. He has an Environmental Studies degree from Binghamton University, and previously farmed on the West Coast and was the Urban Farm Manager for VINES in Binghamton. In his spare time, Anthony is likely playing or listening to music, or fermenting some veggies from the farm. 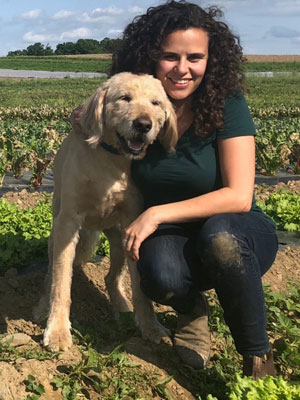 Karli is originally from Niskayuna, NY and started managing the CSA program in 2017 after she met Allan and Bob Cat 8 years ago in a sustainable farming course. When we started growing hemp in 2017, Karli help start NY Hemp Oil (our sister company) and the Head & Heal brand, with Allan. Karli has a huge fluffy dog named Zeek and spends most of her free time working on converting a school bus into an RV with her boyfriend Craig. Follow her on instagram @ Karlimh

Mike is originally from Auburn, NY where he found his interest in teaching. He worked as an elementary school art teacher before joining the Main Street Farms crew. Mike oversees daily operations on the farm and his favorite activity is weed wacking. In his free time he does wood working and travels to Columbia where his Wife Joni is from. 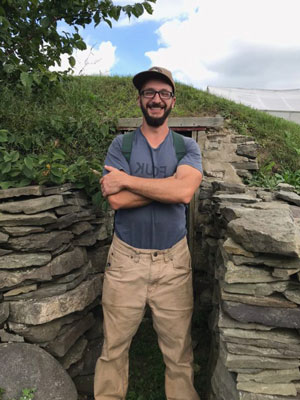 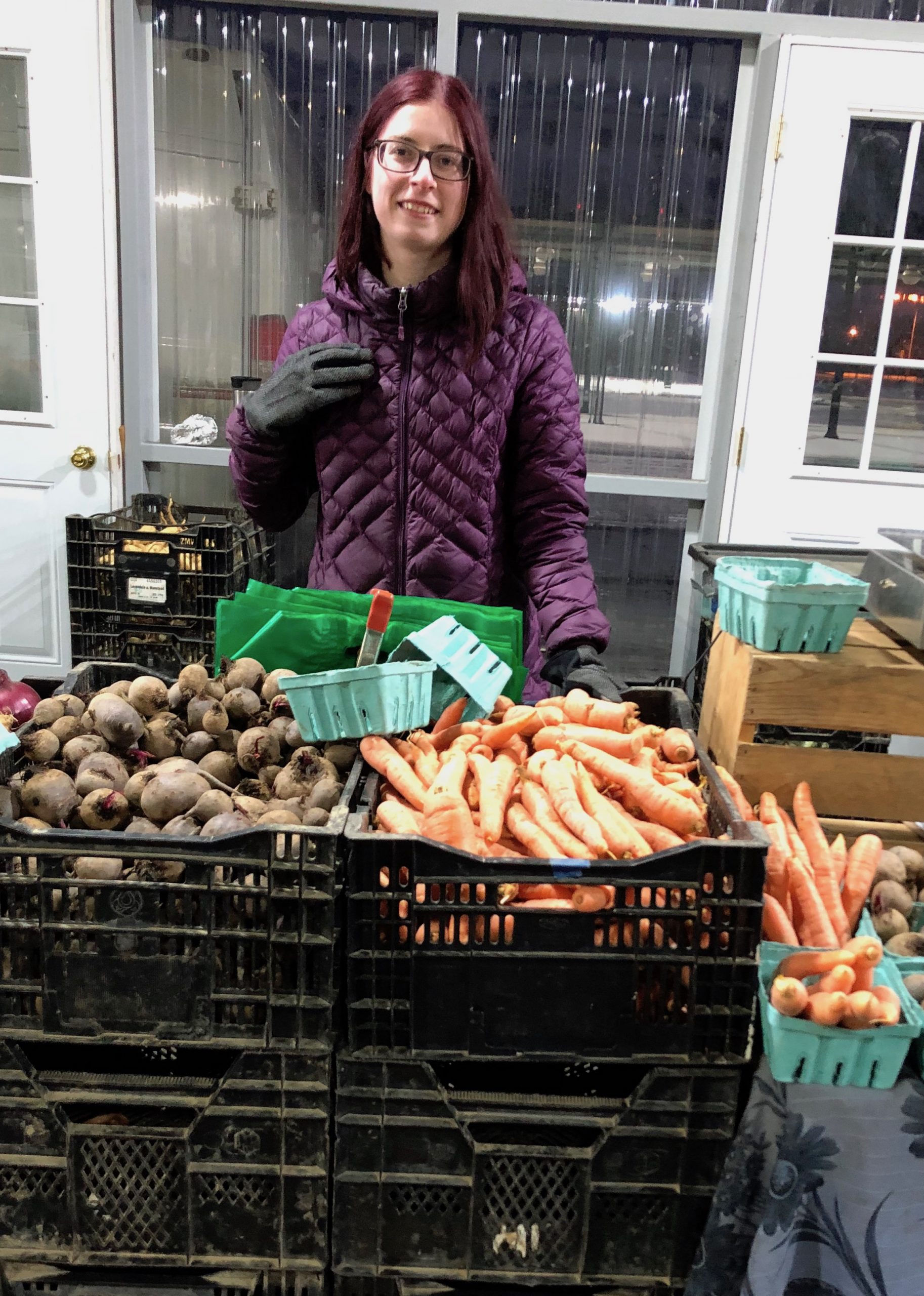 Liz is a familiar face at the CNY Regional Market, most Saturdays in Syracuse.  She has been working with us at market for over 3 years now.  Liz loves veggies and plant-based foods.

John was originally a CSA member years ago.  When he retired from being an athletic trainer, he asked if he could volunteer on the farm.  Instead we offered him a job working at the Syracuse market.  He has also worked in the pack shed, washing veggies for the last 2 years.  John is very passionate about building resilient, sustainable communities. 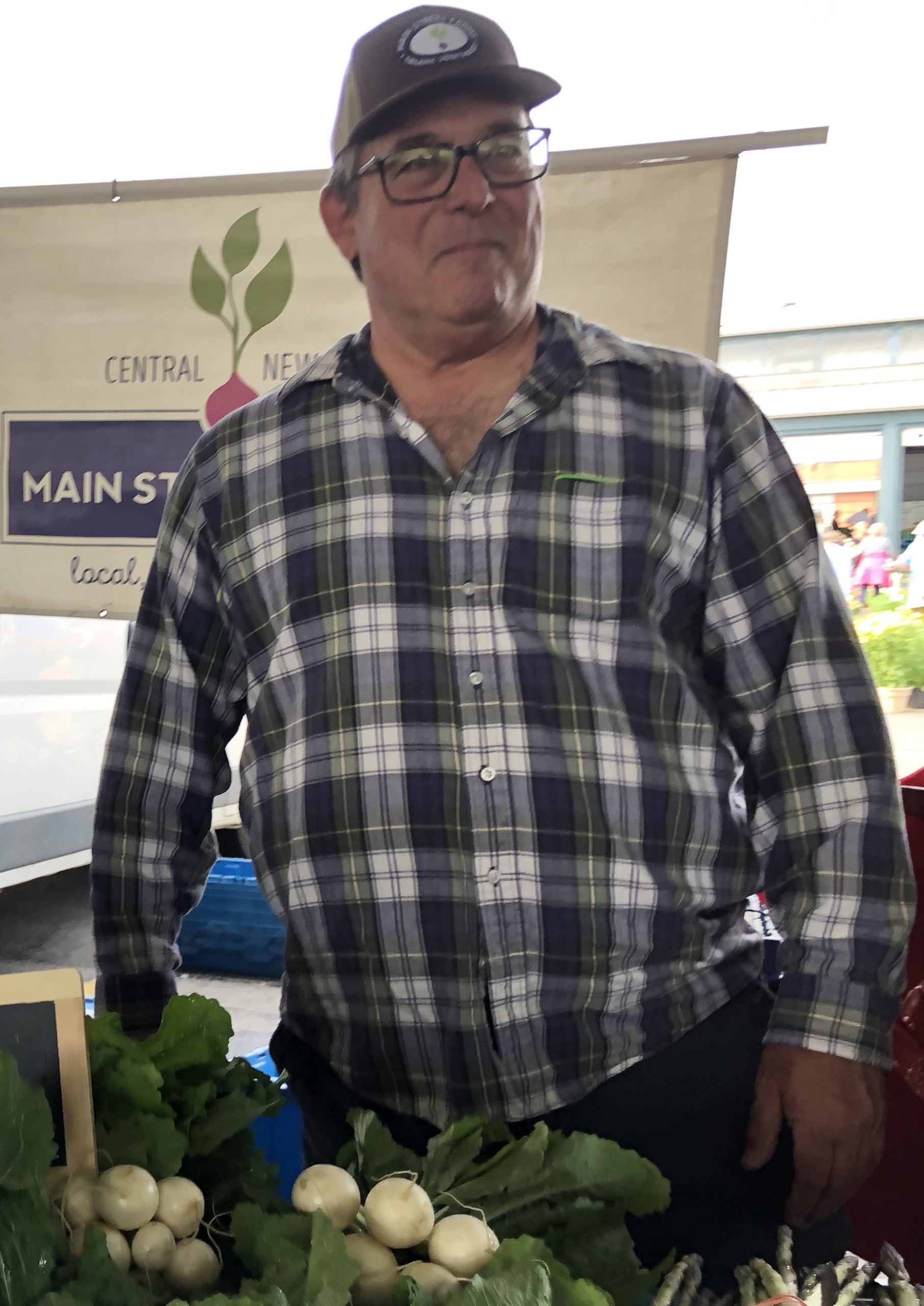 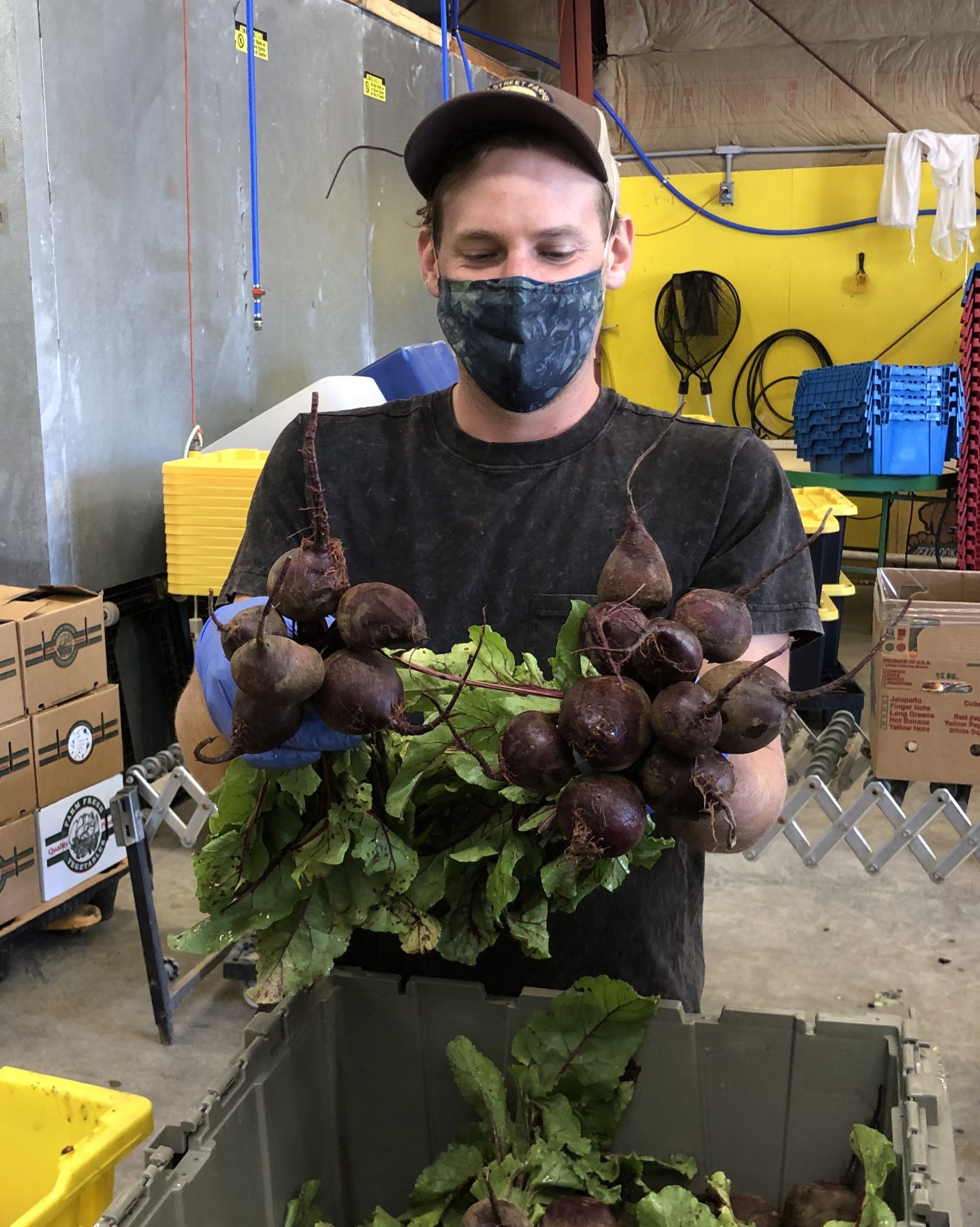 Sean joined us in 2020 as CSA manager.  He also works for Cobblestone Valley Farm in Preble.  Sean is passionate about Bio Dynamic Farming.

Emily joined us in 2020 as part of the pack shed crew.  She is a graduate of Cornell University.  Emily currently works as a guide at the Forest Learning Collective at Lime Hollow Nature Center in Cortland. 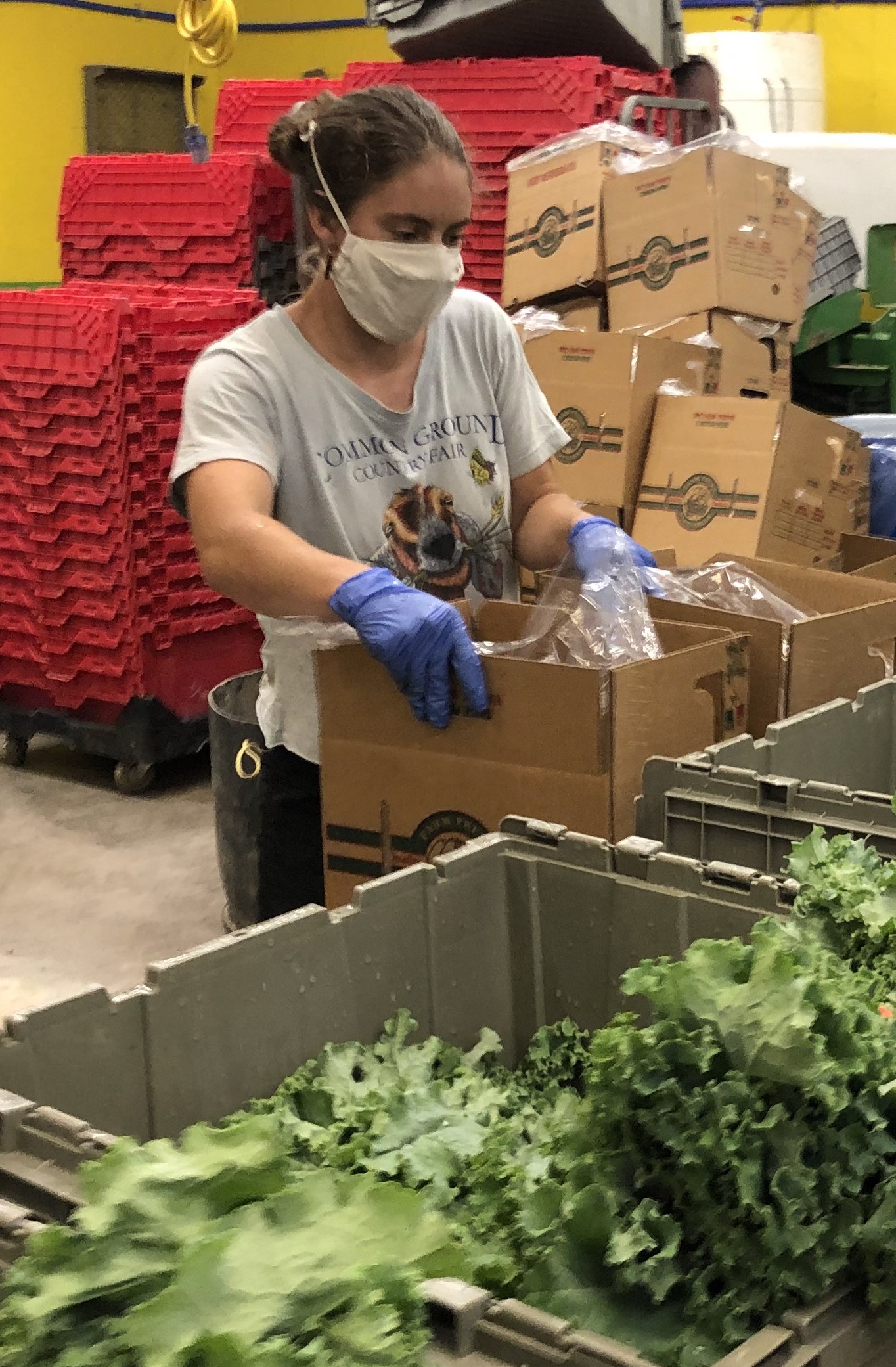 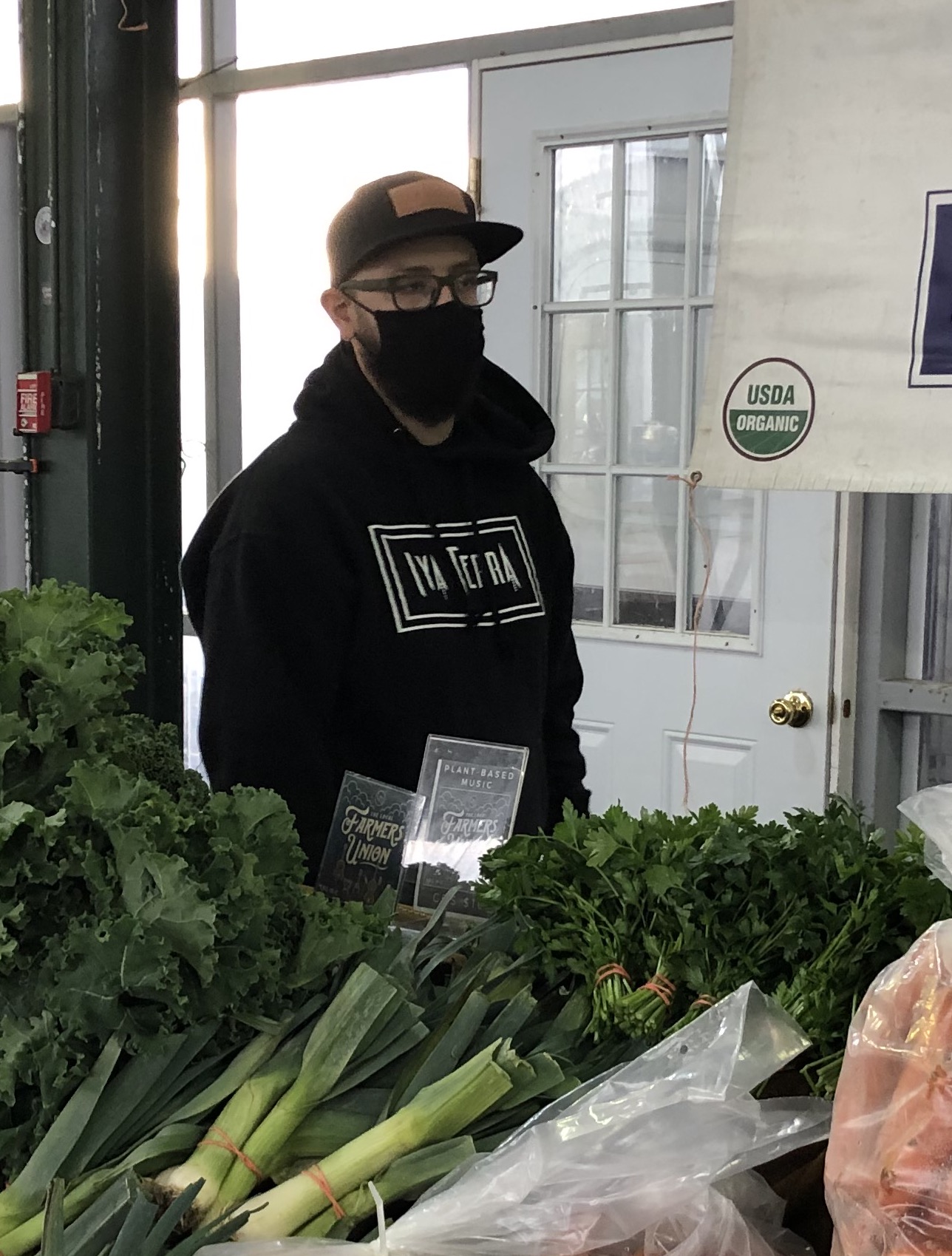 TJ grew up in Dryden.  He studied renewable energy in North Carolina.  TJ spend several years living in Oregon working on a farm and in Florida working in food service.  In 2020, TJ moved back to the area to be closer to family, establish some roots, and to work on our farm.

Karlyn is a Homer native.  After living in Baltimore for the last decade, she moved back to the area in 2020.  Karlyn loves to cook, bake, and spend time with her dogs. 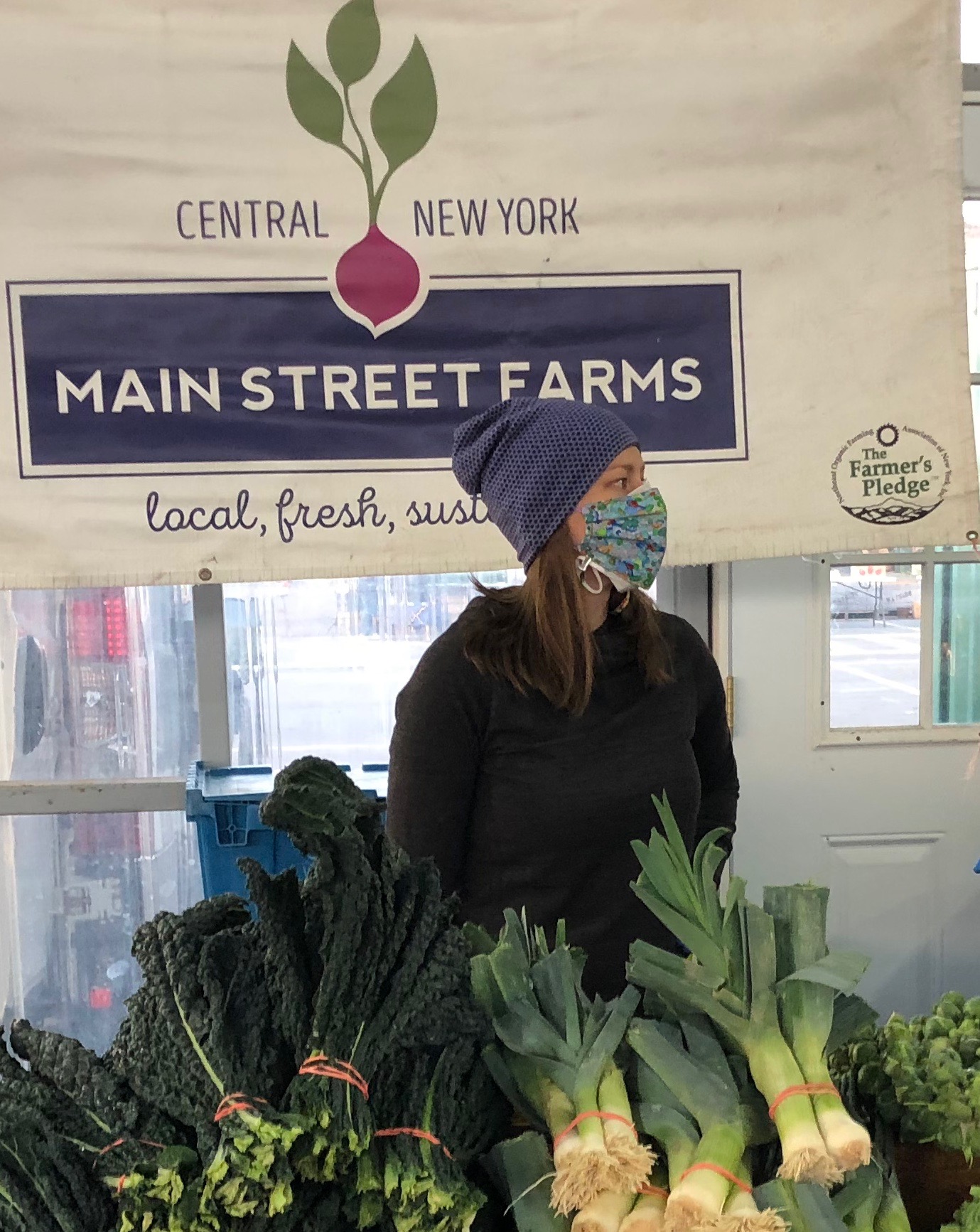